The Great White Shark being a descendant of or closely related to the Megalodon might be the most commonly repeated misconception about the prehistoric shark. Even more so than that the Megalodon may still be alive (thanks Discover Channel). While it was once believed to be true many decades ago, this view is currently not held among scientists based on the fossil evidence.

When the Megalodon was first scientifically described back in 1843 based on giant fossil teeth it was placed in the genus Carcharodon. This is the same genus as the Great White Shark. Both sharks had big serrated teeth, and were the apex predators of their time so they must be related, right? Our understanding of shark taxonomy, evolution and the fossil record was pretty primitive at the time compared to what it is now.

Starting around the turn of the last century scientists began to question whether the Megalodon was really closely related to the Great White. The main contention was that the structure and growth patterns of Megalodon teeth and Great White Shark teeth are vastly different. They began to notice that the teeth of the Great White Shark are much more similar to another large, extinct shark, Isurus hastalis, commonly known as the Broad-Toothed Mako.  The obvious difference being the lack of serrations in Isurus, but the serrations are also vastly different between Megalodon and Great White Teeth. 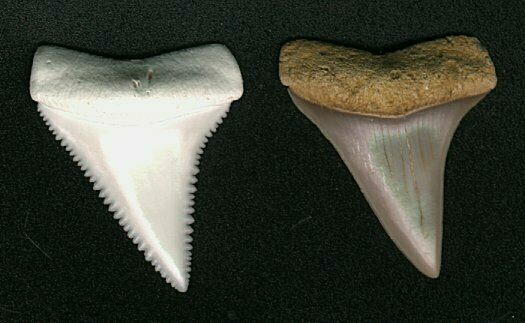 
If you lay a Great White tooth of similar tooth position and growth stage of the Broad-Toothed Mako the two are almost an exact match.  Well, except for the lack of serrations in Isurus.  In cases where the serrations have been worn away on fossil Great White teeth, the teeth of the two species are nearly impossible to tell apart.

At the same time researchers were able to demonstrate a great similarity between the teeth of the Megalodon and yet another genus of extinct, giant shark, Charcharocles. They proposed that the Megalodon should properly be assigned to Charcharocles not Carcharodon. Given the disagreement in viewpoint, people began referring the Megalodon species as simply C. Megalodon.

Whether the Great White Shark belonged in the Carcharodon or Charcharocles became a hotly debated subject by scientists. Over the decades, as more fossil evidence mounted scientists increasingly began to view the original assignment of the Megalodon to the Carcharodon genus as being invalid. Then an important fossil discovery made in 1988 which solidified the view that the Great White Shark was descended from the Broad-Toothed Mako. 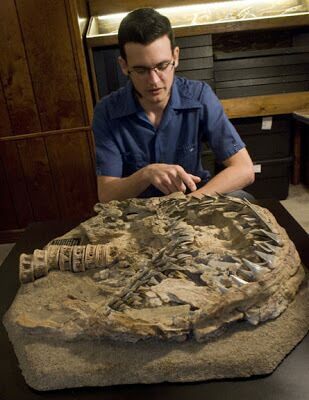 
This discovery was an exceptionally well preserved, 6.5 million year old, fossil White Shark in Peru. It was 16 feet long and consisting of two sets of jaws and 45 vertebrae. This fossil was truly exceptional because sharks skeletons are composed of cartilage that rarely fossilizes. This specimen would later be named Carcharodon hubbelli after Gordon Hubbell who recovered the fossil from a farmer and donated it to Florida Museum of Natural History in 2009. Carcharodon hubbelli appears to represent a transitional species and the missing link between the Broad-Toothed Mako and the Great White.

At the same time researchers were able to trace the linage of the Megalodon all the wayback to Cretaceous, some 65 million years ago. This linage started with Cretolamna appendiculata, then Otodus obliquus, Otodus mugodzharicus (transient form), Carcharocles angustiden, Carcharocles chubutensis (transient form) and finally ending with the Megalodon. This evolutionary sequence can be characterized by an increase in tooth size/thickness, the acquisition of a serrated edge, and the loss of secondary cusps on the tooth. Some scientists have proposed that this linage represents a chronospecies with no forks from which other sharks evolved, going back to the Cretaceous.

There is still some of debate about the exact classification the sharks in the Carcharocles genus, and maybe the Megalodon will find itself assigned to yet another genus in the future. But, what is clear among scientists is the Great White is not directly descended from the Megalodon, nor are they closely related. No matter how many times it gets repeated in popular media. 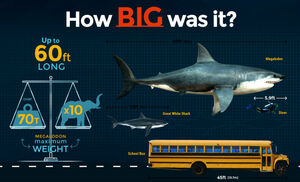