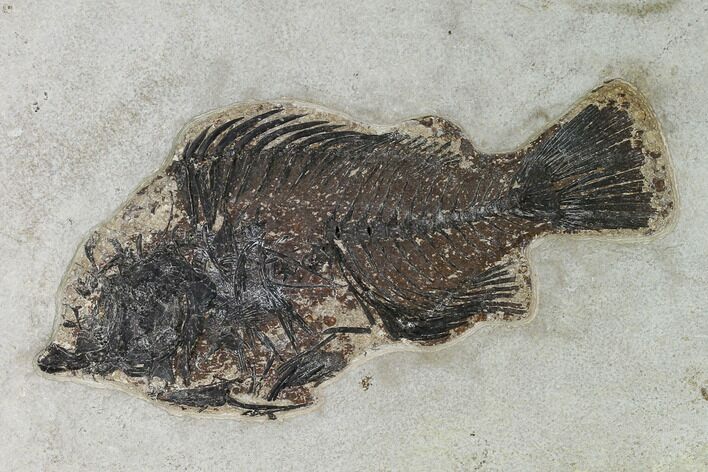 This is a nicely preserved 9.7" long Priscacara serrata fish from the famous 18 Inch Layer of the Green River Formation. It was collected from Warfield's Quarry near Kemmerer, Wyoming.

It comes from the coveted 18 inch layer of the Green River Formation which produces darker and more detailed fish than the majority on the market. The rock from this layer is much harder and more durable. This layer is typically collected at night using low-angle light to see the bump in the rock that the backbone creates. They then cut these fish out and take them to a lab where the fish, which may be up to an inch under the surface of the rock, are meticulously extracted under microscope with hand tools.

A view of the 18 inch layer of the Green River Formation at the Lindgren quarry near Kemmerer, Wyoming.

50 million years ago, in the Eocene these fish thrived in Fossil Lake fed by Uinta and Rocky Mountain highlands. The anoxic conditions at the bottom of Fossil Lake slowed bacterial decomposition, prevented scavengers from disturbing corpses, and most interestingly, suffocated creatures that ventured into the oxygen-starved aquatic layer. The result is a miraculous exhibition of Eocene biota in a subtropical, aquatic community within sycamore forests teeming with creatures such as freshwater stingrays, dog-sized horses, menacing alligators, early flying bats, and one of the first primates.

A view of one of the commercial quarries where fossils from the Green River Formation are collected.
SOLD
DETAILS
SPECIES
Priscacara serrata
AGE
Eocene (~48 million years)