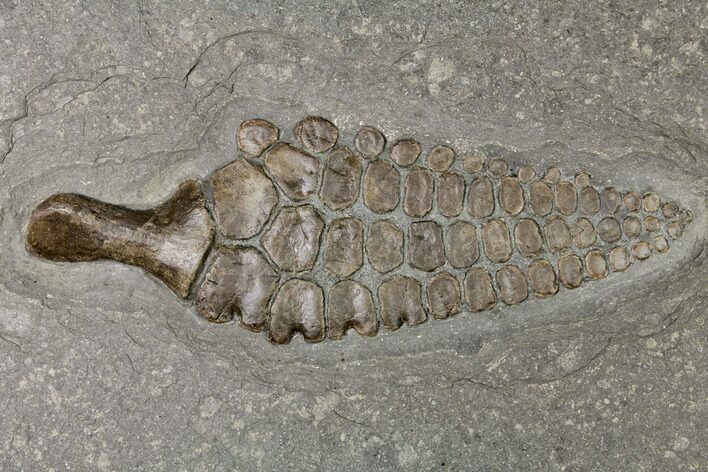 This is a 11.3" long, fossil Ichthyosaur paddle from the Posidonia Shale in Germany. The bones are in excellent condition and it has been expertly prepared. The paddle was originally disarticulated but the bones have been moved back into their life-like positions. The paddle was then mounted into rectangularly cut piece of shale that measures 17.7 x 13.6" for display purposes.

Ichthyosaurs were swordfish-like marine reptiles of the Order Ichthyosauria. They had torpedo shaped bodies with long narrowly pointed jaws, large pectoral fins and crescent shaped tails. They were the high speed predators of the Jurassic seas, indicating they ate a fish diet. This is confirmed by analysis of coprolites (fossil feces). They evolved about 250 million years ago but did not hit they diversity apex until the Jurassic. There are currently 97 known Genera (plural Genus). It is thought that they are descended from diapsids like dinosaurs and birds, but a recent theory suggest they may have descended from a distant relative of turtles. Ichthyosaurus had disappeared from the fossil record by about 90 million years ago. It is not known why they died out.


Ichthyosaurs are not fish. Their resemblance to them is an example two groups adapting to their environment with similar adaptations without having a common ancestor. This is called convergent evolution. Ichthyosaurs are reptiles with lungs that had to surface to breath. Fish have gills that take dissolved oxygen from water. Ichthyosaurs looked like swordfish or dolphins. Their bodies were larger near the head and tapered to a sleek crescent shaped tail. Ichthyosaurs had one of the largest eyes relative to body size of any organism. It is presumed that this allowed them to move throughout the water column to find prey. The crescent tail allowed them to reach tremendous speed in the water. Some estimates put the top speed of the fastest species above 30 mph. Like most fish living today, it is thought that Ichthyosaurus was dark colored on its back and sides and light on its belly.

The Posidonia Shale outcrops in the Holzmaden, Germany area have been commercially mined for centuries and has been used for such things as tile, table tops and fireplace hearths. These quarrying operations have also uncovered a vast treasure trove of beautifully preserved, Early Jurassic (~183 million years old) fossils. The lower shale layers have produced fossils including ichthyosaurs with preserved skin and soft tissue impressions.

A view of one of the quarries in the Posidonia Shale of Southern Germany. 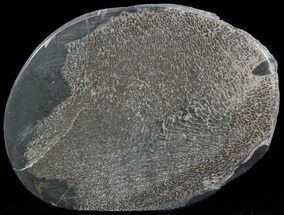 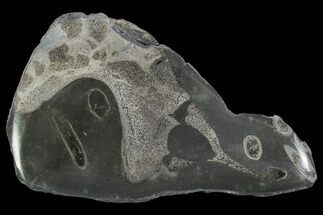 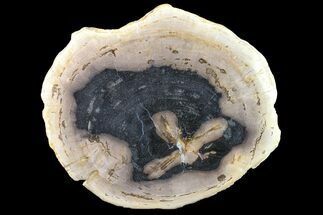 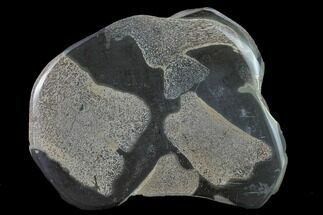