We decided to compile a list of the most popular crystals and minerals based off of search volumes. The crystals on the list might be popular for a variety of reasons. They might be popular among collectors, popular in the metaphysical community or people just think they are pretty. In general they tend to be more common crystals, thus are relatively inexpensive, occur as larger specimens and be quite colorful. So, here is the list. 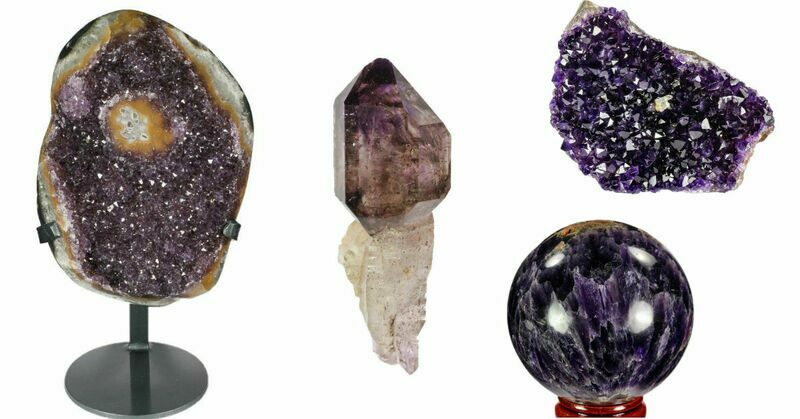 A striking, purple variety of quartz which is best known for occurring in large, crystal encrusted geodes mined in Brazil and Uruguay. While quartz itself is clear, amethyst gets its purple color from naturally irradiated iron inclusions within the quartz crystals. The more low level irradiation it has been exposed to (over millions of years) the darker the color.

Up until the 18th century amethyst was considered one of the most valuable gemstones along with diamonds, rubies, sapphires and emeralds until the discovery of large deposits in South America. While most of the amethyst on the market still comes from Brazil and Uruguay, amethyst can be found worldwide with countries such as Mexico, South Africa, Namibia producing beautiful specimens.

Amethysts combination of vibrant color, abundance and relatively low cost for large crystals and geodes lends to its popularity. 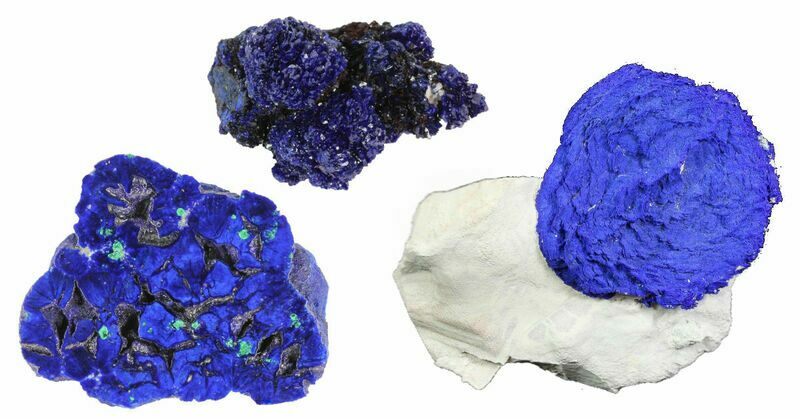 Azurite is a vibrant, blue, copper-based mineral that is commonly associated with another mineral on this list, malachite. The blue of azurite is exceptionally deep and clear, and during antiquity it was used as a popular painting pigment. It tends to form small, prismatic crystals, but also is frequently found in massive fibrous forms or nodules. One particularly interesting azurite formation is the disk-shaped azurite suns found exclusively in the Malbunka Copper Mine of Australia. The coloration, along with the contrasting patterns it forms when associated with other copper minerals makes it a hit among collectors. 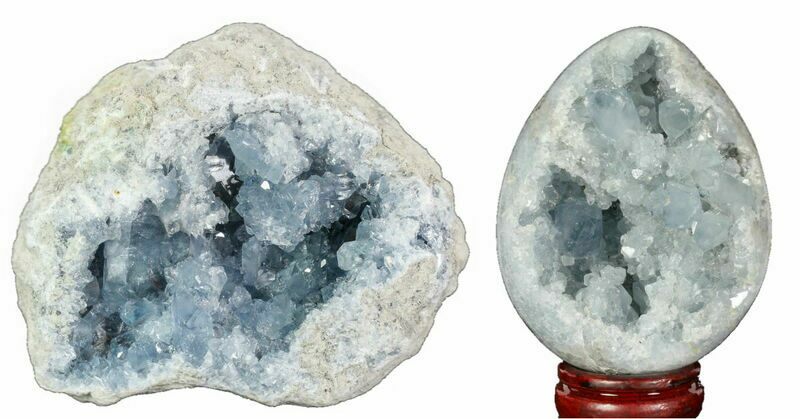 Celestite or Celestine is a strontium based crystal that is best known for occurring in clear to pale blue colorations though it may also be light yellow. The vast majority of the Celestite crystals being sold are coming from Northwestern Madagascar where celestite often occurs in large geodes. Like amethyst, the affordability of large Celestite geodes and crystal clusters lends to its popularity. 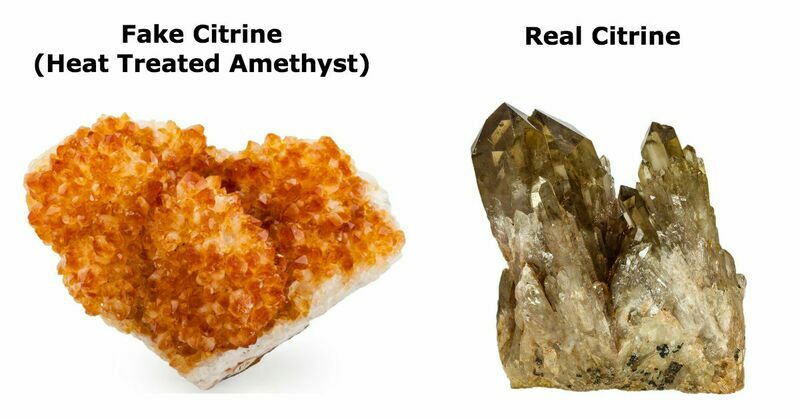 Citrine crystals are one of the most popularly searched for crystals according to Google. But, most people don’t know what real citrine looks like. 99.9% of the crystals sold as citrine are not actually citrine but are rather amethyst that has been heated in a furnace to make it orange. Natural citrine is quite rare and yellowish in color. Citrine in naturally formed as smoky quartz is slowly heated inside the earth, so citrine often contains smoky phantoms within it. 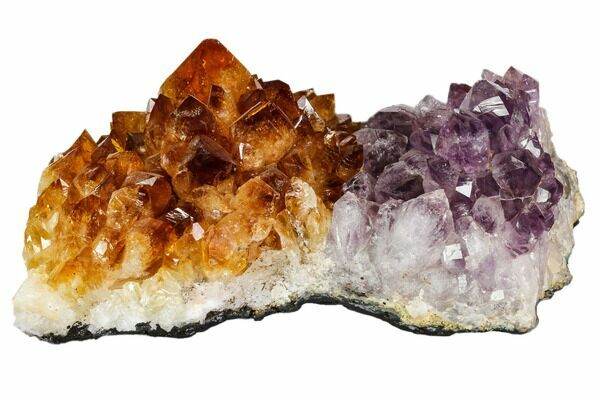 A piece of Brazilian amethyst. One side has been heat-treated to create "citrine". 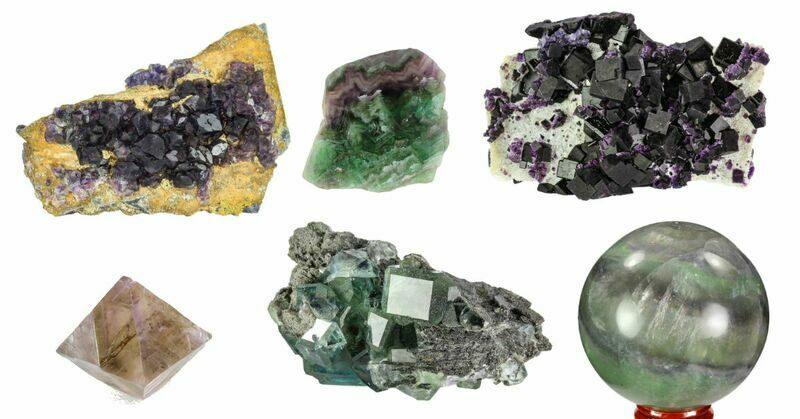 Fluorite is a very colorful mineral that comes in a wide range of colors and crystal habits. It also tends to be highly fluorescent under UV light. Some of the most frequently seen colors are green and purple though it may also be commonly found in yellows, purples and pretty much any color of the rainbow. It often forms natural cubic, octahedral and dodecahedral crystals.

Fluorite is very popular among mineral collectors due to the huge variety of colors and crystal shapes it can be found in. 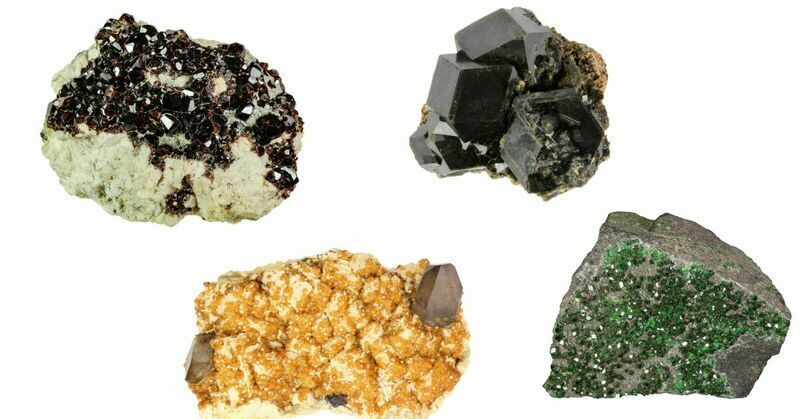 Garnet refers to a group of of silicate minerals that have been used since antiquity as gemstones and abrasives due to their hardness. There are over a dozen species of garnets with some of the more common being Almandine, Pyrope, Spessartine, Grossular and Andradite. All of these types of garnets have similar physical properties and crystal forms, but differ in chemical composition.

Malachite is a dark green, copper-based mineral. It can grow in botryoidal masses or stalactitic and reniform formations, typically as a tight cluster of fanning fibrous needles that make up a seemingly solid mass. As layers continue to stack during formation, a banded pattern can sometimes begin to take shape, which explains the rings in all shades of green that are seen on most polished malachite specimens.

Malachite has been prized since ancient times, first as a copper ore, and then as a decorative stone. It is most often seen available for sale in a polished form rather than raw crystals. It is very often associated with other copper-based minerals like Azurite and Chrysocolla. 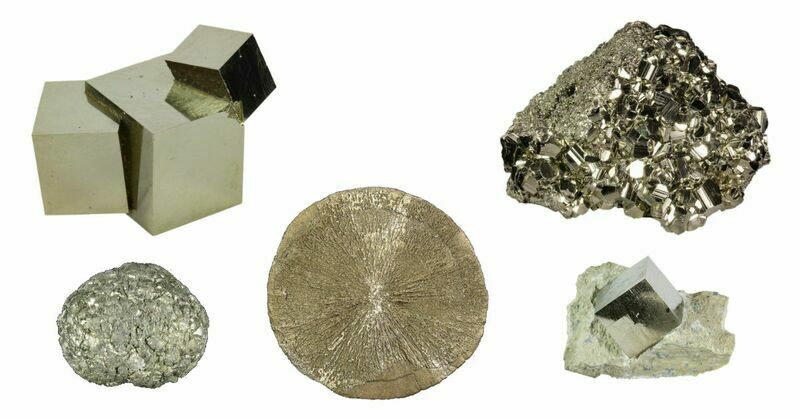 Also known as iron pyrite and fools gold, pyrite is a golden, metallic mineral that forms a number of different crystal shapes. It’s known for occurring in perfectly formed cubes that don’t look like they could possibly be natural. The best known source of these pyrite cubes is the famous Victoria Mine in Spain. Another interesting type formation is known as a pyrite sun, found in the coal mines of Illinois. Pyrite is frequently found associated with other metallic minerals like galena and sphalerite as well as often being found with quartz crystals.

It’s amazing crystal shapes and eye catching appearance lends to its popularity among both collectors and those that just want something cool, created by nature to show off. 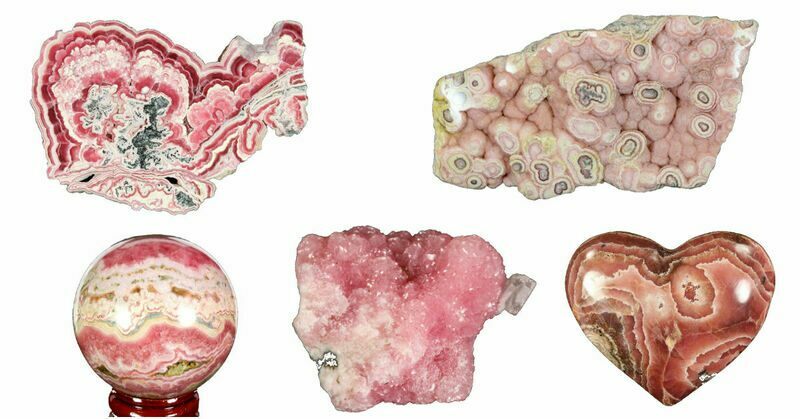 Rhodochrosite is a vibrant, pink to rose red colored mineral. It’s fairly uncommon only being found in a few locations around the world, most notably Argentina and South Africa. Well formed crystals of Rhodochrosite are extremely rare and highly coveted by collectors. More frequently rhodochrosite dissolved in water will accumulate inside of cavities within a rock formation. Over time this will create banded formations similar to agates. These banded formations are often cut and polished into slabs, eggs, spheres and other decorative items.

Rhodochrosite is Argentina's "national gemstone" and Colorado officially named rhodochrosite as its state mineral in 2002. 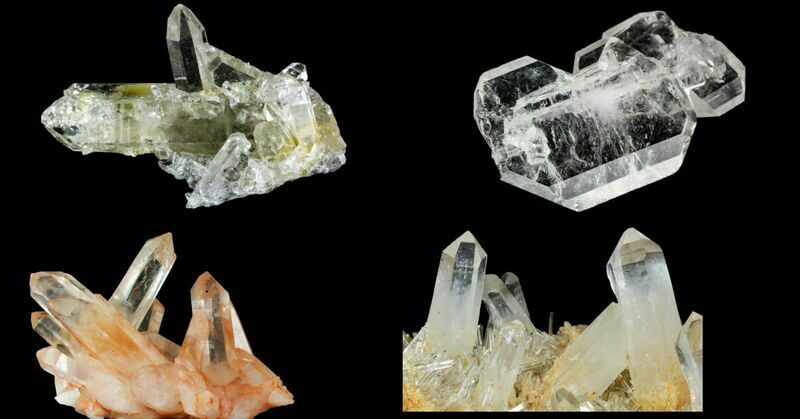 A couple variations of quartz, amethyst and citrine already appear on this list, but quartz in general is the most common type of crystal people search for. That’s fitting given that it’s also the most common crystal on this planet. It features dozens of color variations depending on the types of naturally occurring mineral inclusions within the crystals and their surrounding environments. The most common variety is the plain old, white to crystal clear quartz. 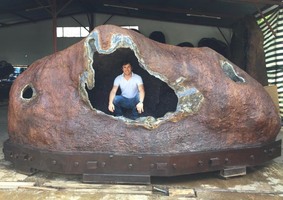 What is the largest geode in the world? 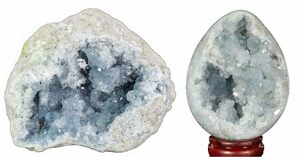 What Is Amethyst Worth? Amethyst Price & Valuation