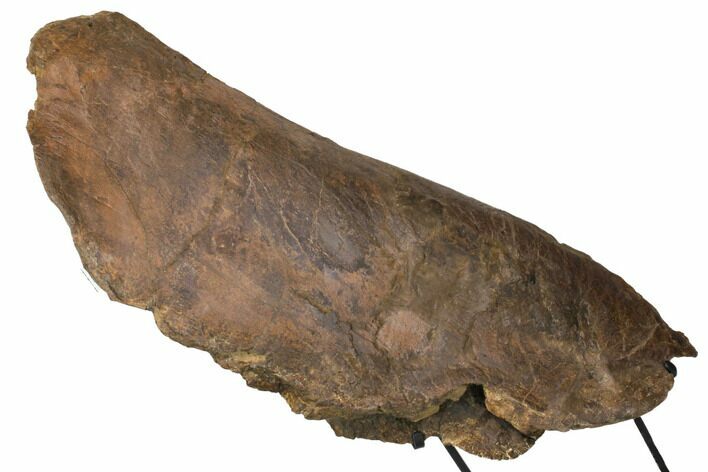 Due to the size and weight of this piece it will be shipped on a pallet or in a crate via freight. Our website can't automatically calculate freight shipping costs so these costs will be calculated and billed after purchase. Please contact us prior to purchase if you need a shipping quote.


This is a spectacular, 32.8" Squamosal (back of skull) bone of a Ceratopsian dinosaur from the Hell Creek Formation of Montana. The squamosal bone makes up the posterior-lateral side of the skull and is the proximal edge of the frill.

Two Hell Creek experts who have looked at it thought the surface texture was different than most Triceratops they'd seen and suggested it might be Torosaurus or another ceratopsian. To me the shape appears to match Triceratops more than the squamosals of other Ceratopsians known from the Hell Creek Formation.

It is incredibly well preserved with just a few crack repairs and minor gap fill restoration. Great surface preservation with almost no weathering. On its stand, this is a very striking display.

Because of its age and sedimentary composition, the Hell Creek Formation has become one of the most paleontologically studied areas in the world. 158 genera of animals and 64 genera of plants are known from the formation and new discoveries are made frequently. In addition to Tyrannosaurs, Ceratopsids, and Hadrosaurs, the formation has yielded remains of amphibians, reptiles, lizards, snakes and turtles, fish and sharks, avian and non-avian dinosaurs, and mammals. The Hell Creek Formation gives the most complete understanding of the environment just before the Cretaceous-Paleogene extinction.
FOR SALE
$4,950
DETAILS
SPECIES
Triceratops?
AGE
Late Cretaceous (~66 Million Years)