These are authentic Gerastos trilobite fossils quarried near Issomour, Morocco. Gerastos is a small proetid trilobite that is fairly abundant. These trilobites were found encased in hard limestone and have been prepared using mechanical tools to expose their detailed shell.

They are quite 3D and range from about 3/4" to 1" long though some will be slightly larger or slightly smaller. These are real trilobite fossils, not molds or casts. The reason they are so inexpensive is the preparation is very rough, leaving a lot of scratches and dings on the shell. There is no restoration on them though.

The photos are representative of the trilobites being sold, but are not the exact specimens that you will receive.

Trilobites were a very diverse group of extinct marine arthropods. They first appeared in the fossil record in the Early Cambrian (521 million years ago) and went extinct during the Permian mass extinction (250 million years ago). They were one of the most successful of the early animals on our planet with over 25k described species, filling nearly every evolutionary niche. Due in large part to a hard exoskeleton (shell), they left a excellent fossil record.
More About Trilobites
FOR SALE
$7
45 Available
Quantity Discounts
5 to 24 Pieces
$6
25+ Pieces
$5
DETAILS
SPECIES
Gerastos sp.
AGE
Lower-Middle Devonian
LOCATION
Issomour, Morocco
FOSSIL SIZE
Most 3/4" to 1" long
RELATED 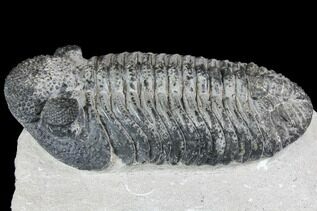 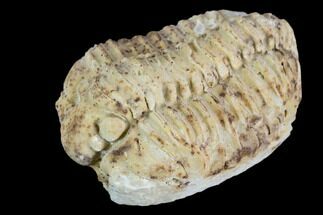