Triceratops skeleton Natural History Museum of Los Angeles County. Photo: Allie Caulfield
was one of the most abundant dinosaurs in the North America during the Late Cretaceous (around 68-66 mya). This ceratopsid dinosaur had a signature three pronged and bony frilled skull, which it may have used to protect itself from giant meat-eaters such as Tyranosaurus rex.


Triceratops is the subject of important discoveries about its growth and development, as well as its taxonomy. A current hypothesis includes that as the animal matures, tissue may have been redistributed from the central crest area, out toward the frill. The result would be holes in the crest which would have made the crest appear bigger without making it heavier.

Patterns on the skin covering the crest might have evolved to advertise identity. Epoccipitals, a bony frill, has been found on some individuals. Some scientists assert that adornment of the crest would have been a possible feature for sexual display or identification.

Triceratops has a distinctly solid crest, separating it taxonomically from other ceratopsids. This status is currently pending, as scientists debate evidence suggesting that different genera and species with fenestrate crests represent different growth stages of one species of Triceratops. The possibility remains that Torosaurus was an immature Triceratops. Discoveries of highly variable skull structure fuel the debate. Jack Horner, of Montana State University, noted that ceratopsians contain metaplastic bone in their skulls. This allows tissue to adjust in length over time, extending and resorbing to change its shape.

The implications of such taxonomic changes are amazing. Should different species of Cretaceous dinosaurs be found to be immature versions of other adult species, then a decline in diversity would have been earlier than previously asserted. Triceratops was already considered one of the last vestiges of the great beasts. Triceratops has been relatively unique for its abundance in the fossil record, so that many individuals could be examined. This detail does not exclude different, though less abundant species from also having ontogenic changes across its lifespan.

Currently, many species of dinosaur are being re-evaluated due to the possible ontogeny of Triceratops. Such unique tissue is not unprecedented in the modern era. The Cassowary of New Guinea is a dangerous but beautiful, large, flightless bird that has a crest of tissue on its head and powerful legs. The tissue on its head may be analogous to that of the ceratopsids. The tissue is described as spongy or foam-like.

The frill of the Triceratops crest also contains wound-healing fibroblasts. This is a useful advantage whether punctures are from dueling rivals, or from giant carnivores. Scientists are still establishing if such a tool is for display, a protective shield, or both. There is fossil evidence that Triceratops had healed from T-rex inflicted wounds.

The jaws were tipped with a beak-like structure. This beak structure was ideal for plucking and grabbing tough vegetation.

Triceratops is estimated to have been nearly 30 feet long (9m), and nearly 10 feet tall (3m). The largest skull would have covered a third of its body, and was over 8 feet long. Triceratops had sturdy legs and three, pointed facial horns that extended 3 feet long. This dinosaur is considered to have had a powerful build, similar to that of a rhino. The largest white rhinoceros was an estimated 10,000 lbs, while the largest black rhinos grow to about 4,000 lbs. In comparison, the Triceratops may have grown to 26,000 lbs.

Closeup of jaws and teeth. Photo: Bradypus
possessed hundreds of teeth due to consistent tooth replacement. Triceratops likely chewed palms, ferns and cycads. Triceroptops teeth were suited for plucking fibrous plants with a beak-tipped mouth and chewing the material with 432-800 teeth which are arranged in batteries. These batteries consisted of tooth columns arranged on each side of the jaw- 36 to 40 of them per side. Each column contained 3 to 5 teeth stacked on top of each other. Larger individuals had more teeth. The seeming importance of tooth replacement and the emphasis on number of teeth imply that Triceratops had to consume large quantities of tough vegetation.

Triceratops behavior is not completely understood. It clearly grazed on the tough vegetation, but whether it did so in large herds like buffalo is an unanswered question. Fossil evidence shows that it did battle with T-rex on occasion, and could survive the encounter. It is unclear if that survival was due to defense technique such as seen in elephants, rhinos, or bison. Recently a few individuals were discovered together that may be a family group. Triceratops may have been lone wanderers despite their apparent abundance, but definitive conclusions on its lifestyle are still being investigated.

The Hell Creek Formation where Triceratops is abundant includes portions of Montana, North Dakota, South Dakota, and Wyoming. It is a series of fresh and brackish-water clays, mudstones, and sandstones deposited by river channels and deltas at the end of the Cretaceous period and the beginning of the Paleogene. The low-lying area was at the eastern continental margin of the Western Interior Seaway. The climate was mild, and sub-tropical.

The recent reclassification of related species by proponents of new ontogenic theories may alter future interpretations on the disappearance of the large North American dinosaur. By eliminating species, the taxonomic shifts reveal a loss in dinosaur diversity that was earlier than previously described. The abundance of Triceratops fossils suggest that they were ideally suited for their particular niche, though like the other non-avian dinosaurs, they did not escape extinction. 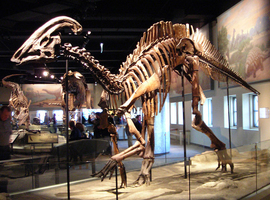