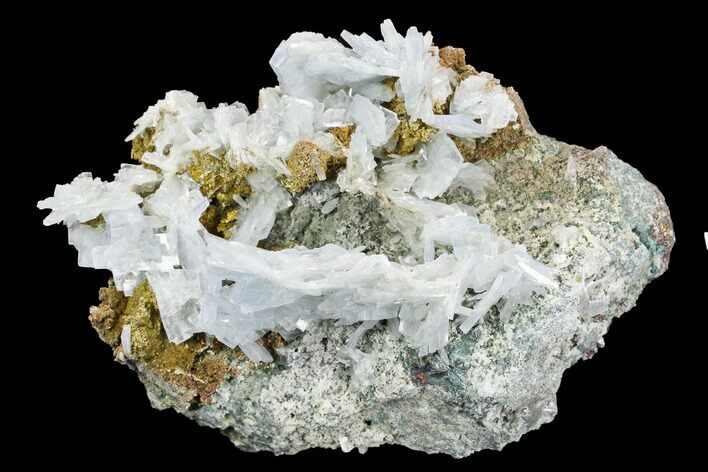 This is a cluster of blue bladed barite crystals that formed in association with chalcopyrite and marcasite crystals. It was collected from the Bou Nahas Mine in Morocco. Comes with an acrylic display stand.

Marcasite is an iron sulfide mineral with the chemical formula FeS2. It is similar to pyrite in both its chemical composition and appearance, however it forms with a different crystal structure and is much more reactive to humidity. It is often found within sedimentary rock and hydrothermal deposits, and at one point was used for its sulfur content.

Chalcopyrite is a brass-yellow colored mineral which is one of the most important ores of copper. When weathered chalcopyrite loses it's metallic luster, turning a gray-green color. When acids are present the tarnish can develop a red to blue to purple iridescence.
SOLD
DETAILS
SPECIES
Barite, Chalcopyrite & Marcasite
LOCATION
Bou Nahas Mine, Oumjrane area, Morocco
SIZE
4.6 x 3.3"
CATEGORY
Barite
ITEM
#122242
SHIPPING
Shipping & Return Policy info.