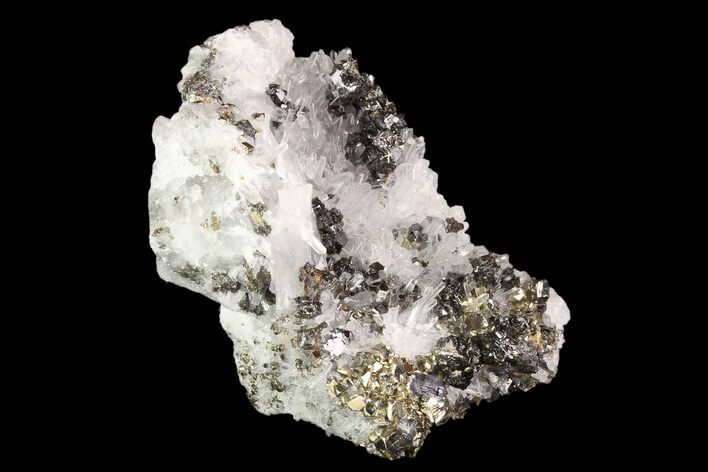 This beautiful specimen contains an association of pyrite, sphalerite and small quartz crystals. It comes from the Huanzala Mine in Peru and the entire piece measures 2.6" across.

Pyrite or iron pyrite is commonly referred to as Fool's Gold because it's metallic luster and pale brass-yellow hue give it a superficial resemblance to gold. In the old mining days, Pyrite was sometimes mistaken for Gold. Pyrite is the most common of the sulfide minerals with the chemical formula FeS2. Pyrite crystals occur in many shapes and habits. Smaller (druzy) crystal aggregates may give off a beautiful glistening effects, and larger crystals may be perfectly formed, including fascinating cubes, penetration twins, and other interesting crystal forms.
FOR SALE
$25
DETAILS
SPECIES
Sphalerite, Pyrite & Quartz
LOCATION
Huanzala Mine, Bolognesi, Peru
SIZE
2.6 x 1.6"
CATEGORY
Pyrite
SUB CATEGORY
Pyrite From Peru
ITEM
#99695
SHIPPING
Shipping & Return Policy info. 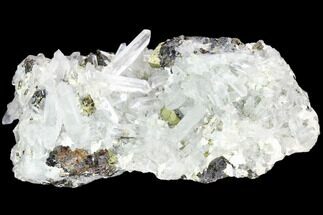 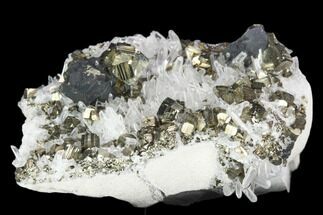 2.2" Quartz, Sphalerite and Pyrite Association - Peru
SOLD
SOLD
FossilEra & Coronavirus Shutdowns
Washington state has now joined over a dozen other states to put in place “shelter in place” or “stay at home” orders. While we agree this is the correct course of action, it will have a substantial impact on our business. It effectively shuts down much of our company for several weeks.