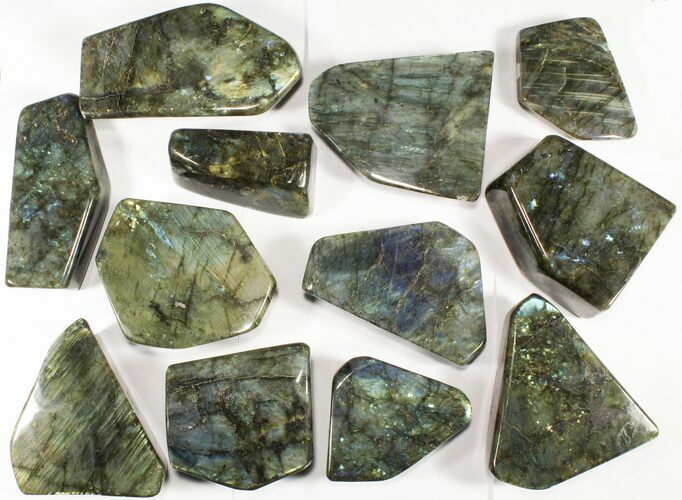 This is a wholesale lot of 25 lbs of beautiful, polished labradorite from Madagascar. The lot is made up of 12 pieces measuring from approximately 4 to 6" across/tall. The quality varies from piece to piece but in general this lot has great color play and Labradorescence. Each piece has one side which is cut flat allowing them to stand upright on a flat surface and create a beautiful display

On average these pieces can easily retail for several times the wholesale price. You will receive the exact lot pictured

Labradorite is named after where it was first found in Labrador, Canada. Today, the most prolific deposits and the source of most commercially available labradorite occur in Madagascar and Russia.
SOLD
DETAILS
SPECIES
Labradorite
LOCATION
Madagascar
SIZE
25 lbs, 12 pieces, Most pieces 4 to 6" across/tall
CATEGORY
Clearance Lots
ITEM
#78028
SHIPPING
Shipping & Return Policy info.