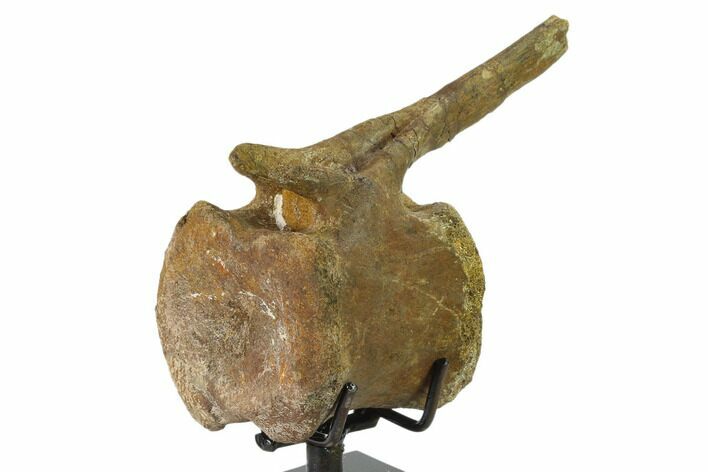 This is a nice, 4.5" long, fossil hadrosaur (Brachylophosaur) metatarsal from the Two Medicine Formation of Montana. Most of the process is still intact and it only has some minor repairs and crack fills. Comes with a custom metal display stand.

The Two Medicine Formation is a geographical formation in Central Montana and Southcentral Alberta, Canada and is named for the Two Medicine River in Montana. The formation is predominantly sandstone laid down by rivers and deltas during the Campanian Age of the Cretaceous about 80-75 million years ago. Approximately two thousand feet thick on the western edge, it lies on top of the Virgelle Sandstone formation and under the Bearpaw Shale. It is located between the Front Range of the Rocky Mountains and the Sweetgrass Arch, a tectonic fold feature 40-90 miles east of the Front Range. It is analogous to the Judith River Formation but remains a separate feature.

are frequently referred to as duck-billed dinosaurs and are members of the ornithischian family Hadrosauridae They were fairly common herbivores which roamed Asia, Europe and North America during the Upper Cretaceous Period. Many species of hardrosaurs had distinct crests on their head, some of which had air filed chambers that may have produced a distinct sound. These crests may have been used for both audio and visual display purposes.
View Jurassic World Fossils
SOLD
DETAILS
SPECIES
Brachylophosaur sp.
AGE
Late Cretaceous