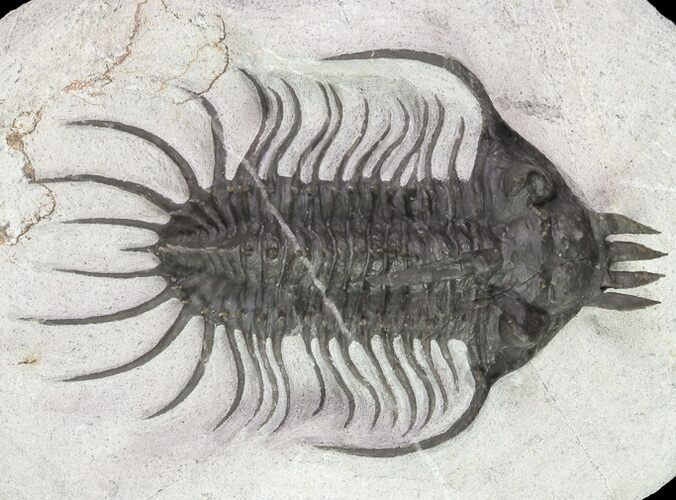 This is a spectacular specimen of one of my favorite species of trilobites, the very alien looking Quadrops flexuosa. This bizarre trilobite has a distinctive four-forked protrusion coming off of the front of it's head which is where the genus gets it's name. It is not only a rare trilobite but extremely hard and time consuming to prepare owing to the hardness of the rock and the it's many free standing spines.

This specimen is quite large for the species and 3.4" in length and the quality of preparation is very good. All of the spines are real, the eye facets are clear and there is the shell in not burnt by air abrasives. It took on the order of 50 hours of preparation work under microscope to carefully remove the hard limestone surrounding it using air abrasives and air scribes. There is an interesting quartz seam running through the rock and the trilobite which adds some character to the piece. 2-3% restoration along the repaired cracks and a portion of the occipital spine (horn) has been restored.

Trilobites were a very diverse group of extinct marine arthropods. They first appeared in the fossil record in the Early Cambrian (521 million years ago) and went extinct during the Permian mass extinction (250 million years ago). They were one of the most successful of the early animals on our planet with over 25k described species, filling nearly every evolutionary niche. Due in large part to a hard exoskeleton (shell), they left a excellent fossil record.
More About Trilobites
SOLD
DETAILS
SPECIES
Quadrops flexuosa
AGE
Devonian