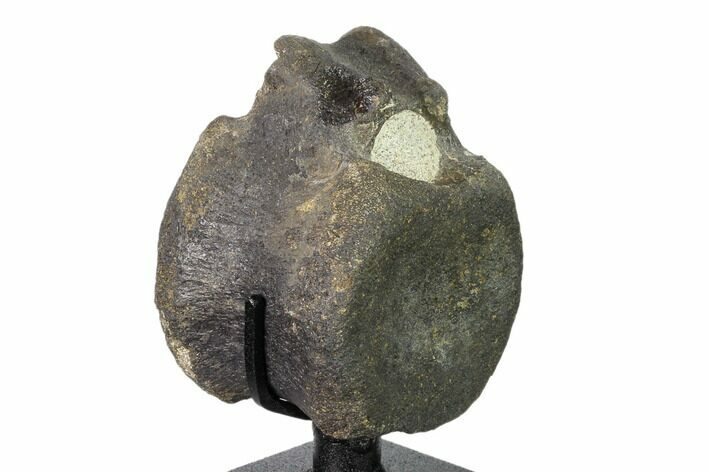 This is a 3.4" Ceratopsian (Achelosaur) caudal (tail) vertebra from the Two Medicine Formation of Montana.

There are repaired cracks with some minor gap fill restoration through the pedicles. The centrum is missing a section of bone along one edge, though there is no repair or restoration. A neat feature of this specimen is the vertebral arch that remained intact through the preservation process. The rock it was found in has been left within the vertebral foramen to ensure structural integrity.

Ceratopsians are a group of plant-eating dinosaurs from the Cretaceous characterized by a bony frill on the back of the skull and a unique upper beak bone, called a rostral. Ceratopsians ranged in size from 1 meter (3 ft) and 23 kilograms (50 lb) to over 9 meters (30 ft) and 9,100 kg (20,100 lb). Triceratops is by far the best-known ceratopsian to the general public.

A view of the Two Medicine Formation quarry operated by Northwest Montana Fossils where much of our Two Medicine dinosaur material has been found.
FOR SALE
$495
DETAILS
SPECIES
Achelosaur sp.
AGE
Late Cretaceous (~74 Million Years)