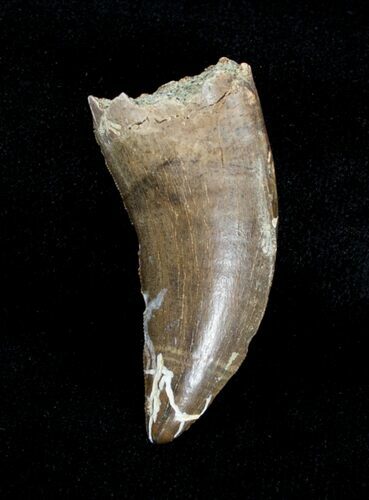 This is a beautiful tooth from the tyrannosaurid dinosaur Albertosaurus. It was from the Upper Cretaceous Two Medicine Formation (Judith River Group) of Montana. The tooth tooth itself is 1.50 inches in length (straightline measurement) One side has great enamel preservation with a few etchings due to roots while the back side has quite a few root etchings. Some of the serrations are present, though many are chipped.

An artists reconstruction of Albertosaurus.
is a genus of tyrannosaurid dinosaur that lived in North America during the Late Cretaceous period, approximately 70 million years ago. It would have been very similar to T-Rex but is estimated to be about half the size, probably weighing less than two tons.

Albertosaurus shared a similar body type with other tyrannosaurids. It was bipedal with very small foreams, each with only two claws. It's estimated that they could run 8-13 miles per hour and may have hunted in packs. Albertosaurus teeth had very thin serrations that would have been used to pull meat from the body of their prey rather than cut it.
More About Albertosaurus
About Dinosaur Teeth
SOLD
DETAILS
SPECIES
Albertosaurus libratus
AGE
Late Cretaceous (~74 Million Years)