Fossils
Amber
Chiapas (Mexico) Amber
Amber is fossilized tree resin which frequently contains inclusions such as plant matter, fungi, and insects. This amber comes from mines in Chiapas, Mexico, and was formed during the early Miocene (23-28 million years ago)

Although younger than other ambers, Mexican is distinctly harder than others as well. Mexican Amber comes in a wide array of colors not found in Baltic amber. The colors range through greens, reds, and yellows. 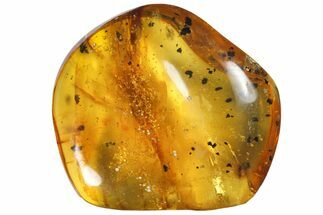 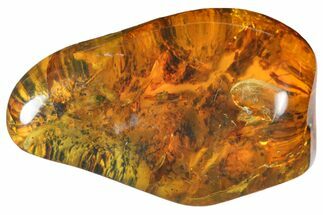 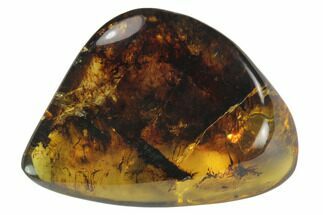 How Old Is Chiapas Amber?

Mexican or Chiapas Amber is about 24 million years old. It is found in marine shale sediment. It is believed that the amber sat at the bottom of a shallow sea or bay as the amber can have bivalves and other shell imbedded on the surface.

What Color Is Chiapas Amber?

The source of Mexican or Chiapas Amber is a coniferous tree of the genus Hymenaea. There is some question as to which species it is. There are living relatives in Central and South America, but the closest living relative of this extinct tree is in South Africa.

What Is Unique About Chiapas Amber?

Mexican Amber is among the youngest of ambers and at the same time, one of the hardest. This is the result of very high heat and pressure during formation. This makes it much more stable for cutting or drilling. Mexican amber also has a high Perylene content making it highly fluorescent and phosphorescent, meaning that it will continue to glow even after the UV source is removed.

How Has Chiapas Amber Been Used Historically?

Mexican Amber was first discovered by the Mayans who traded with the Aztecs. One Conquistador’s journal described the Aztec ruler Montezuma stirring his chocolate with an amber spoon. In addition to implements and decoration, Amber was used by the Mayans and Aztecs medicinally and as incense. Mexican Amber was relatively unknown outside of Mexico until the 1980’s. Its popularity increased as a result of demand brought on by the 1993 release of the movie Jurassic Park.

How Do You Tell If Chiapas Amber Is Authentic?

Amber might be the most frequently faked fossil. With the invention of plastics it has become even easier. Sometimes holes will even be drilled in real amber, modern insects added and the holes filled in with resin. Be very suspicious of large insects and other fossils preserved in amber, as larger insects can typically struggle free.