Megalodon vs Mosasaurus: Who would win?

Sometimes we get rather interesting questions through the contact for at FossilEra. One person wondered who we thought would win in a hypothetical fight between two of the top, prehistoric marine predators, Megalodon and the Mosasaurus.  So here goes..

Much like the heated debates that plague comic book shops around the world of Batman vs. Superman, Hulk vs. Wolverine, Iron man vs. Batman, the Justice League vs. The Avengers, or any other plethora of battle combinations, paleontology nerds have arguments very similar just for the fun of it. Tyrannosaurus Rex vs. Spinosaurus is a common match and was fun to watch in Jurassic Park III, but this post will be focused on two of the largest predators of the sea, Mosasaurus hoffmanni vs. Carcharocles megalodon.

Both were apex predators of the sea while they lived, but these two monsters would never have met, being separated by about 50 million years. The extinction of aquatic reptiles, the large mosasaurs in particular, at the end of the Cretaceous allowed for massive sharks like megalodon to evolve to fill the void left behind.

Most mosasaurs couldn’t complete with megalodon as far as size, but the largest remains of Mosasaurus hofffmanni put estimates of its length at 59 ft. which matches the length estimate for megalodon, so at least the competitors are fairly matched in length.

Mosasaurus had around 40-50 massive teeth, which were conical and sharp, fitted into a jaw that was long and tapered. The jaw was double-hinged with a flexible skull, which enabled them to gulp down their prey whole much like modern snakes. This was not a predator that took large bites out of its prey but one that pierced its prey and swallowed it whole. Mosasaurs likely preyed on fish, turtles, ammonites, and smaller mosasaurs and plesiosaurs. With ammonites reaching from mere inches to 4.5 ft. in diameter, mosasaurs could have survived on a smorgasbord of Cephalopods alone. Mosasaurus was a reptile, and like all other reptiles it had to breathe air, so it would need to come to the surface now and again to fill its lungs with oxygen. Its limbs had evolved to be paddle-like, with skin fusing the finger and toe bones together. They had a slim body plan with a long strong tail and swam with a serpentine undulation of the whole body using the limbs more for maneuvering than locomotion. 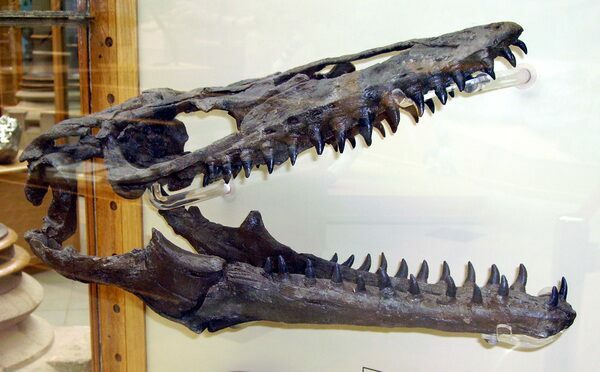 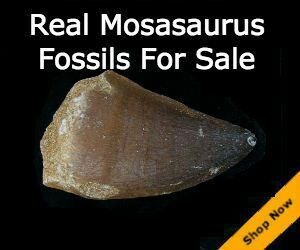 In the massive jaws 7 ft. jaws of megalodon there were 5 rows of around 276 compressed, blade-like teeth that were made for cutting and grasping powerful prey. Sharks have skeletons made of cartilage that are typically not preserved in the fossil record and so the jaws of megalodon and a few trace fossils are all paleontologists have to build their hypotheses. The body shape of a megalodon is likely similar to a larger and more robust great white shark. If megalodon exhibitied behavior like great white sharks and was an ambush hunter, it would have taken prey by surprise from below and made precision strikes to immobilize its prey with a amazingly strong bite. Sharks are also known for shaking their prey side to side to increase those bite forces. Fossil evidence suggests that megalodon was an active predator of large whales with teeth marks found on whale vertebrae and their teeth were built in a way that they would rarely crack even if they hit bone. 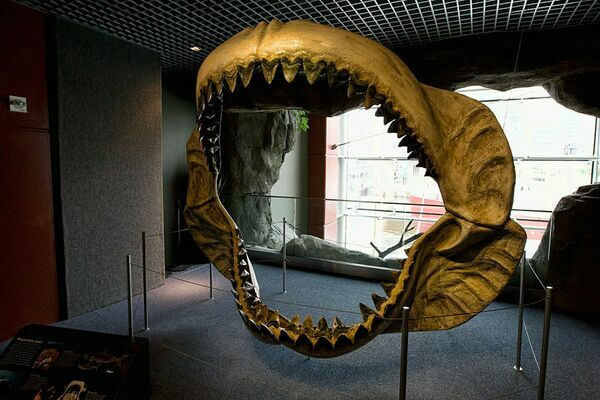 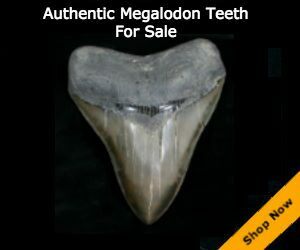 After all of these facts an obvious winner emerges, so for the sake of a more interesting article I give you the following scenario…

A crazy time traveler with a penchant for watching prehistoric beasts battle to the death has captured both a mosasaur and a megalodon and placed them into a massive tank ripe for aquatic gladiatorial combat. Both are angry and hungry by being displaced in time and are hankering for a fight. The two beasts circle each other, sizing each other up, thinking with their primeval brains how to go in for the kill. The mosasaur looks at the large bulk of the megalodon and thinks it can outmaneuver and attack its fins or tail, unsure whether or not it can get a solid bite on the bulkier areas of the shark. The megalodon decides to chomp down on the midsection of the long mosasaur body to immobilize it and tear it apart, but really any area of the body will do.

They circle closer together, the mosasaur slinks through the water in alternating slow and then faster nervous bursts of speed when the megalodon swims a bit closer. The megalodon just swims in a steady, watchful way with its piercing black eyes. The mosasaur cautiously and quickly makes one last trip to the surface for air and quickly dives trying to maneuver underneath the megalodon.

Suddenly the megalodon twists with a burst of speed and rushes the Mosasaur, not allowing it to get an upper hand by positioning itself to strike from below. The two beast comes clashing together, the mosasaur attempts maneuver out of the way and fails to get a bite to the tail of the megalodon. The megalodon turns its body to place the mosasaur squarely in front of its jaws and chops down on the quivering flesh of the mosasaur’s tail as it tries to slither away. As the megalodon bites down again and again the flailing mosasaur’s muscles seize and then go limp as blood spills out into the water.

The time traveller shows displeasure at this outcome, wanting the much cooler aquatic reptile to win over a bloated shark.

Who would be the winner seems pretty obvious.  The Mosasaurus had a long, thin body with jaws designed more for feeding on smaller prey such as ammonites and fish.   While a similar length, the Megalodon had a much more robust body and huge jaws built for devouring whales and other large marine mammals.  A Mosasaurus would not have been able to get its jaws around the much thicker body of the Megalodon.  It would just take one catastrophic bite for the Megalodon to end the battle.  In addition the Mosasaur’s body type would have been inefficient for high-speed swimming giving the Megalodon another huge advantage in maneverablity. 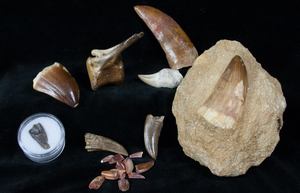 What Did The Megalodon Shark Eat? 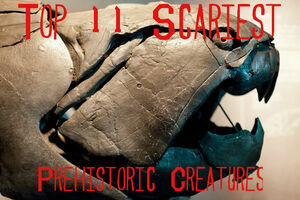 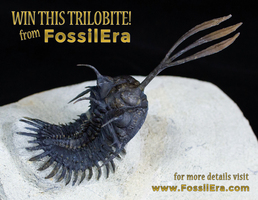 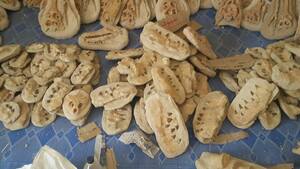